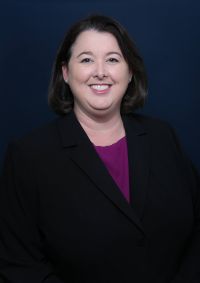 Stacey Napier is the Vice Chancellor for Governmental Relations at the University of Texas System.  In this role, Ms. Napier serves as the   primary liaison between the UT System Administration and Board of Regents and the Texas Legislature on the wide range of budget and policy issues and concerns that affect higher education and health care in Texas generally and the UT System institutions.   She is also the liaison with Executive Branch officials and agencies of Texas state government and at times with local governments in Austin and around the state.

Ms. Napier began her career in state government working in the Texas House of Representatives as a legislative aide to State Representative Kenn George and later as General Counsel and Chief of Staff to Texas Senator Florence Shapiro.  In 2003, she joined then-Attorney General Greg Abbott as the Chief of the Intergovernmental Relations Division at the Office of the Attorney General (OAG).

Over the next 12 years, she served in various roles of increasing responsibility at the OAG, including Senior Counsel to the Attorney General and Deputy Attorney General for Administration, where she oversaw eight divisions within the OAG.  In January of 2015, Gov. Abbott named Ms. Napier as the Director of Administration for the Office of the Governor.  In this role, she oversaw the day-to-day operations of the agency, continued to routinely interact with legislators and staff and testified on behalf of the agency in budget hearings throughout the session.

In February 2016, Ms. Napier was named Executive Director of the Texas Department of Information Resources (DIR).  As Executive Director, Ms. Napier oversaw the agency’s $750 million biennial budget, all employees, contracts and initiatives.  DIR’s main focus is to improve Texas by being a leader in technology innovation and contracting.  Ms. Napier served as Executive Director through October 2018, when she was named Vice Chancellor for Governmental Relations. She now serves on the Board of the Department of Information Resources as the board member representing institutions of higher education.

Stacey earned a Bachelor's degree from Louisiana State University and a law degree from the Southern Methodist University School of Law. She is licensed by the State Bar of Texas. Stacey and her husband Rod have two very active young boys, aged 13 and 15.