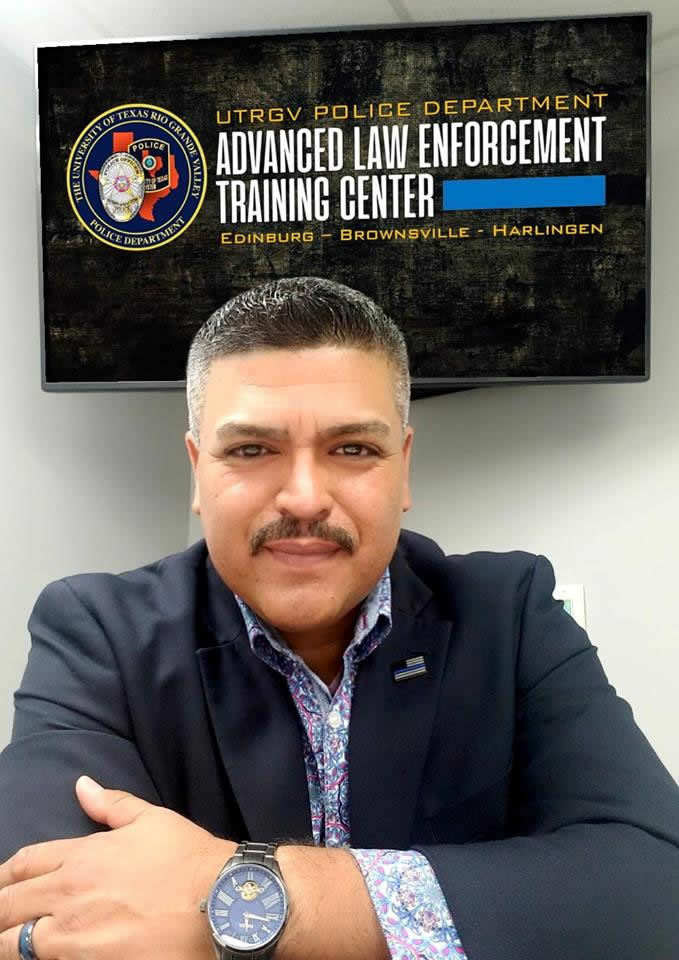 I became part of the UTSP family after having served in several capacities for 13 years with the Hidalgo County Sheriff’s Office, where I spent my last 5 years as the Training Academy’s lead use of force instructor.  It was later on June 1st, 2013 when I got recruited by our legacy institution UT Pan American Police Department.  I was recruited with the mission to put together, develop and implement the operation of what is now known as the “Advanced Law Enforcement Training Center”.  A fully functional professional law enforcement training center where we have had student visitors from agencies from all over.  From small size local agencies to large municipal & county agencies such as Houston PD, Harris County Sheriff’s Office, San Antonio PD, Austin PD and Travis County Sheriff’s Office, as well as federal law enforcement personnel form agencies such as the US Marshals Service, US Customs & Border Protection, Homeland Security Investigations, US Veterans Affairs Police, US Fish & Wildlife Service, US Border Patrol and the Federal Bureau of Investigations.

It is with great pride that I have the opportunity to represent UTSP/UT Rio Grande Valley Police Department through our training center. A training center that caters to all local, municipal and county law enforcement agencies as well as their State and Federal counterparts.  My training credentials have been vetted and recognized by the Texas DPS Academy, the US Department of Justice and the Federal Law Enforcement Training Center.  As a result of that, I have become an adjunct instructor for said entities to function as a training resource for their respective personnel.  It is not an uncommon thing to see our parking lot partially filled with marked units (primarily) from the Texas Highway Patrol and the US Border Patrol , among many other marked police vehicles from local and state agencies.

An important highlight of my career is serving as a provider of training and technical support to other large police agencies and their respective academies (Texas DPS, McAllen Police Academy, Hidalgo County Sheriff’s Office and Brownsville Police Academy among others).  I have had the privilege to not only serve Texas law enforcement as a trainer, but the states of New Mexico, Arizona and Illinois as well.

The most recent representation of my agency and perhaps one of the most important presentations in my career so far, took place in March 21 and 22, 2018 when I presented at the International Law Enforcement Educators & Trainers Association (ILEETA) 2018 Conference in Saint Louis, MO.  ILEETA is the premier and the largest police training association in the world that every year gathers trainers from all over the world for a week of innovative, relevant and solid training.

Additionally, during my second year with this great agency, I was honored with being selected as a Core Trainer for the Below 100 Training Initiative.  Which is a very aggressive nationwide training initiative to reduce preventable line of duty deaths. There are currently only two active Core Trainers in the State of Texas and with a lot of pride one of those two is part of the University of Texas System Police.

Without a doubt, having made this move in becoming part of this amazing UTSP family was not only a contributing factor to my professional development as a trainer, a published writer and a law enforcement officer. This move in itself represented one of the most important contributing factors to help me reach my goal in helping good officers transform into great ones!

Lastly, I would be remiss not to mention the great influence that Chief Munguia, Assistant Chief Loya, Lt. Barrera and UTSP Inspectors Charles Patnode and David Ferrero have meant in my professional growth.

Thank you for the opportunity to be part of this amazing UTSP/UTRGV PD family.