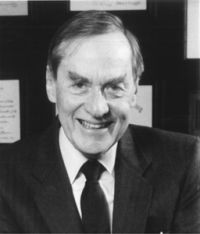 BERNARD RAPOPORT of Waco was appointed to a six-year term on the Board of Regents of The University of Texas System by Governor Ann Richards in 1991.

Since 1951, Mr. Rapoport has been chairman of the board and chief executive officer of the American Income Life Insurance Company in Waco.

Regent Rapoport was born on July 17, 1917, in San Antonio. He graduated from The University of Texas at Austin with a Bachelor of Arts Degree in 1939. He and his wife Audre have a son, Ronald B. Rapoport, who is on the faculty at the College of William and Mary in Virginia.

Mr. Rapoport is involved in many civic activities. He is active in the United Way of Waco McLennan County, the Central Texas Sickle Cell Anemia Association, the National Council on Crime and Delinquency and the National Hispanic Center for Advanced Studies and Policy Analysis. He is also committed to several Jewish organizations including The Jerusalem Foundation, Hebrew Union College and the Union of American Hebrew Congregations.

Mr. Rapoport serves as a Trustee for Paul Quinn College, the Waco Boy's Club Foundation and The Bernard and Audre Rapoport Foundation all of Waco. From 1979-1980, he was Waco Chairman of the United Negro College Fund.

Regent Rapoport is involved in numerous boards and committees, including The Brazos Club Board of Governors, the National Institute for Citizen Education in the Law, the Waco Business League, and the Texas Council of Advisors for the Institute for the Humanities at Salado. He also is a member of the board of directors for Central National Bank, Religion in American Life, the Texas Humanities Resource Center and the American Jewish Congress. National committees with which he is involved include the Economic Policy Institute, Joint Action In Community Service, Inc. and the Joint Center for Political and Economic Studies.

A Guide to the Bernard Rapoport Papers, 1913-1914, 1941-
Being Rapoport
The Bernard and Audre Rapoport Center for Human Rights and Justice

A two-year member of the UT System Board of Regents pledged Monday to "make the UT system a paradigm for what a great university system should be" after being elected chairman of the board. Waco businessman Bernard Rapoport was unanimously elected to a two-year term as regent chairman in an executive session meeting of the board. Ellen Temple of Lufkin and Lowell Lebermann of Austin were elected vice chairs of the board. Rapoport emphasized the need to make college accessible for all qualified students and to improve the quality of teaching and education in the UT system.

"I would like to see any qualified child come to the UT System who wants to," Rapoport said. "That is the first commitment a democratic society has to its constituents." Rapoport was appointed to the board by Gov. Ann Richards in 1991. He succeeds Louis Beecherl, whose term expired in February.

Both Rapoport and UT System Chancellor William Cunningham said they were not overly concerned about impending state budget cuts or their effects on the UT System."It's no problem," Rapoport said. "The vast majority of our legislators are very intelligent and share our commitment to higher education." Cunningham said he was "cautiously optimistic" about the budget.

Rapoport added that he wanted to establish a new commitment to minorities in the UT System. "It shouldn't matter what gender, race, color or creed a person is," he said.

Monday was the first meeting for three new Richards appointees: Lebermann, Peter Coneway of Houston and Martha Smiley of Austin. Smiley said she was "very much" looking forward to serving on the board. "It is an honor to serve on such a great institution," she said. Rapoport said the current board was about as good as anyone could assemble.

The founder of American Income Life Insurance, a company that carved out a niche by providing coverage for union workers in the 1950s, Rapoport was a member of the UT System Board of Regents from 1991 to 1997, serving as chairman for the last four years of his term.

“Bernard Rapoport’s generosity and unwavering commitment to the UT System and its institutions is extraordinary by any measure and his activities in the business and philanthropic worlds are inspiring to each and every Texan who cares about higher education,” said H. Scott Caven, Jr., chairman of the UT System Board of Regents.

“It is because of the generous efforts of visionary individuals such as “B” and his wife, Audre – who have given time, energy and resources to our institutions – that our campuses are leaders in excellence on a world scale,” Caven continued.

The couple also established namesake endowed chairs in pediatric endocrinology, clinical care and research, and cardiovascular research – as well as a center for cardiovascular research – at UT Southwestern Medical Center.  Additionally, the Rapoports gave $100,000 for scholarships to the UT San Antonio Excellence Fund and $5,000 to the UT Health Science Center at San Antonio for the Dr. Mario E. Ramirez Chair Fund in Family and Community Medicine.

In 1988, Rapoport was named to Fortune magazine’s list of the 40 most generous Americans. A year later, he and his wife established the Bernard & Audre Rapoport Foundation, which has contributed more than $32 million to education, arts and culture, community development, and health and child development.

Besides his term as a regent, Rapoport serves on the Chancellor’s Council Executive Committee, the Commission of 125, the We’re Texas Campaign Executive Council and is a life member of the UT Austin Development Board. He serves on the UT Southwestern Health System Board of Visitors and the Leadership Council for UT Southwestern’s Innovations in Medicine campaign. He also served on The University Cancer Foundation Board of Visitors at the UT M. D. Anderson Cancer Center from 1976-1980.

Born in 1917 to Russian immigrants in San Antonio, Rapoport grew up in poverty and attended UT Austin during the Great Depression. He graduated with a bachelor’s degree in 1939 and launched his insurance company in 1951 with the help of a $25,000 loan co-signed by his wife’s uncle. He moved the company to Waco in 1956 so his wife could be near her mother.

Rapoport sold his company in 1994 to McKinney-based Torchmark Corporation, but continued to run the insurance outfit until he retired in 1999.

The award is named for the Santa Rita No. 1, the first producing oil well on UT System property in West Texas. The well produced oil from 1923 to 1990 and spurred growth of the Permanent University Fund.