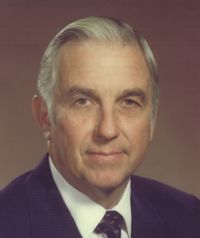 JAMES L. POWELL of Fort McKavett, was appointed to The University of Texas System Board of Regents by Governor Dolph Briscoe in January, 1979, to serve a six-year term. He served as chairman of the U.T. Board of Regents from January 24, 1981 to April 15, 1983.

He received his B.A. from Rice University in 1951, and did graduate work in economics and finance at The University of Texas at Austin. His Powell Ranch, near Fort McKavett, has been the site for extensive agricultural experiments involving foraging quality. His work in range and livestock management has received nationwide acclaim, and he was named "Man of the Year in Agriculture" by the Texas County Agricultural Agents Association in July, 1978.

Mr. Powell, born in 1930, is President of First National Bank, Mertzon, Texas, and is on the Board of Directors of First National Bank of Eldorado, San Angelo National Bank, Texas Commerce Bancshares, Inc. of Houston, and West Texas Wool & Mohair Company, Mertzon. He is a member of the Executive Board, Concho Valley Council, Boy Scouts of America, and has held many positions of leadership in livestock and ranching associations and councils. In 1961, he was president of Texas Sheep and Goat Raisers Association, and has also served as president of the National Wool Growers Association. He is past director of the Mohair Council of America and the Texas and Southwestern Cattle Raisers Association. He is a current member of National Cattleman's Association and served on the Secretary of Agriculture's Technical Advisory Committee for Multilateral Trade Negotiations in 1975.

Mr. Powell is a veteran of the U.S. Navy, and is married to the former Nancy Hunt of Sonora. The Powells have two daughters, Lorrie and Victoria, and are members of the Presbyterian Church. 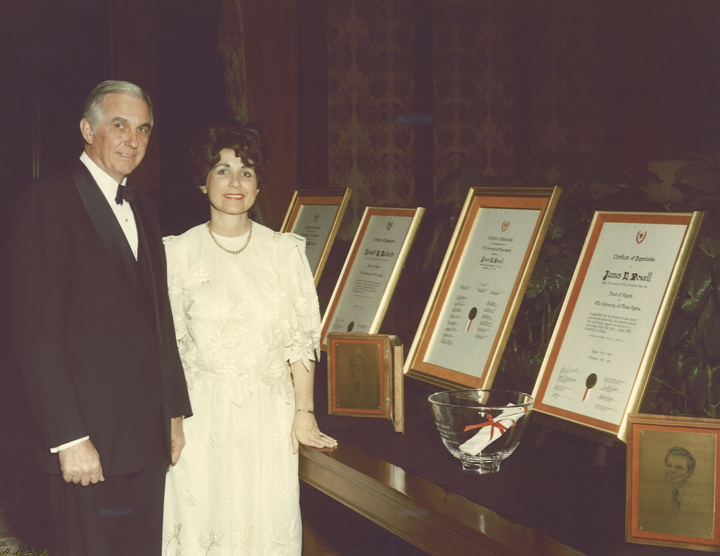 FORT McKAVETT - James L. "Jimmie" Powell, a third-generation rancher, is one of five Texans who will be inducted into the Texas Heritage Hall of Honor on Friday, the opening day of the 2008 State Fair of Texas in Dallas.

Powell, 78, and wife Nancy Hunt Powell have lived on their Six Mile Ranch northwest of Fort McKavett since their marriage in 1960. The ranch was purchased by Jimmie's grandfather in 1932 from Harold Bevans.

Although Powell has devoted his life to ranching, he has also given time and effort to banking and other investments plus higher education by chairing the board of regents of the Texas State University System Board of Regents and the University of Texas System. He is a past president of Texas Sheep & Goat Raisers' Association, the National Wool Growers Association (now the American Sheep Industry Association) and the Texas and Southwestern Cattle Raisers Association.

Jimmie Powell was born Feb. 22, 1930, to Virgil James and Johnnie Dell White Powell. He lived on what is now the Robert Halbert place until finishing the first grade. In 1937, his family moved to San Angelo, where he completed his secondary education. He graduated from Rice University in 1951 and went to graduate school at the University of Texas in Austin. He served in the U.S. Navy from 1952-55 on the aircraft carrier the USS Oriskany off the coast of Korea. He started ranching in Schleicher County following military service.

Nancy Bryan Hunt was born Oct. 21, 1938, to Bryan and Velma Savell Hunt. She grew up in Sutton County and graduated from Sonora High School in 1956, as salutatorian. She attended the University of Texas at Austin.

Standard-Times: How did your family get into ranching?

In those days there was a movement to settle the West. Grandad was running steers, and so he began homesteading property. With five or six cowboys, he would bring steers to West Texas and camp on three or four sections of land (640 acres equals one section) for five years before selling and moving to other land.

In 1918, Powell was homesteading in New Mexico, with several hundred sheep. The cold winter was very severe, and the sheep were kept alive by herding them to the base of the mountains and building large bonfires to keep them warm. The sheep would get so close to the fires that their wool was singed and they were black.

Powell decided that the winters in New Mexico's "Land of Enchantment" were too cold for sheep, so he returned to Texas the next spring with his "blackened" sheep. He purchased a ranch in northern Crockett County on the Reagan County line, which extends to the Big Lake city limits, that remains in the Powell family today. His sister, Marilyn Powell Dean, owns the ranch. Her twin sister, Madolyn Powell Mertz, owns part of the Thomson Ranch in Schleicher County.

Madolyn and Jimmie received portions of the old Thomson Brothers Ranch from their father, Virgil Powell, who bought the ranch in 1960.

Black was credited with bringing some of the first angora goats to Texas. When he built the flock to 4,000 head in 1894, there was no market for the offspring. An entrepreneur at heart, Black established a mutton cannery and a hide tannery on the ranch, and was successful marketing canned goat meat. Black sold 47,000 acres of the ranch to William Bevans in 1896 for 90 cents per acre. The ranch remained in the Bevans family and was operated by Harold H. Bevans, William's son, until 1932, when L.P. Powell purchased it.

The western half of the former Black Ranch is owned by Howard and Faye Dell Derrick. L.P. Powell was also Faye Dell's grandfather.

What keeps you in the business?

I have a deep desire to raise livestock and participate with others to provide a source of food for the people of the nation. In addition, I welcome the challenges to manage the ranch operations.

What's the most unique feature of the ranch?

The head waters of the San Saba River begin on the ranch. It was a favorite place where the Indians camped in the days before Fort McKavett was established. There are still Indian pictographs in several of the caves and bluffs on the ranch. Large pecan and live oak trees by the river are favorite roosting places for wild turkey.

How have you diversified the operation?

We have diversified out of necessity by utilizing the land the best way we can by running small and large animals. We also believe in investing in other parts of the economy, too. I have always been involved in the banking business and oil and gas production.

We have been breeding Hereford cattle since 1954, seeking to produce a heavily muscled quarter with a thick loin designed for maximum performance. The 11th annual Powell Hereford Production Sale will be Oct. 14 at the Six Mile Ranch.

We also have a wildlife management program on the ranches. It has become a very significant part of the ranching business.

The family brand passed down is a flying U. We use a JP on the registered Hereford cattle.