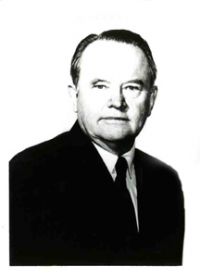 Military Service: Enlisted in World War I and was stationed at Officers Training Camp Zachry Taylor when the war ended

Offices Held: Served as a member of the Board of Trustees of the Lufkin Independent School District; State Senator, 1933-1941; Chairman of the Texas Highway Commission, 1945-1949; Member of the Texas Commission on Higher Education, 1955-1961; Appointed member of The Board of Regents of The University of Texas System in March, 1961

Mr. Peace married Hazel Spears of Austin, Texas, who graduated from The University of Texas in 1922. They live at Harmony Hills Farm in Lufkin, Texas.

In addition to the practice of Law, Mr. Peace is the Director, Vice President, and General Counsel of Winn’s Stores, Inc. of San Antonio, Texas.