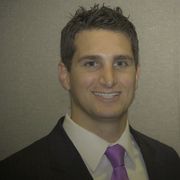 KARIM A. MEIJER of Katy, Texas, was appointed to a one-year term as Student Regent on The University of Texas System Board of Regents by Governor Rick Perry on May 29, 2009. Mr. Meijer, a fourth-year medical student at The University of Texas Southwestern Medical School at Dallas, is studying to become an orthopedic surgeon specializing in sports medicine. He was elected vice president of the class of 2010, director of Healthcare Finance Elective, and president of the Orthopaedic Student Interest Group. He also volunteers with U. T. Southwestern's United to Serve.

Mr. Meijer received a bachelor's degree in Finance from the Red McCombs School of Business at The University of Texas at Austin, where he minored in Spanish. He played on the 2005 National Champion Longhorn Football Team.

*Regent Meijer graduated from The University of Texas Southwestern Medical Center at Dallas in June 2010. 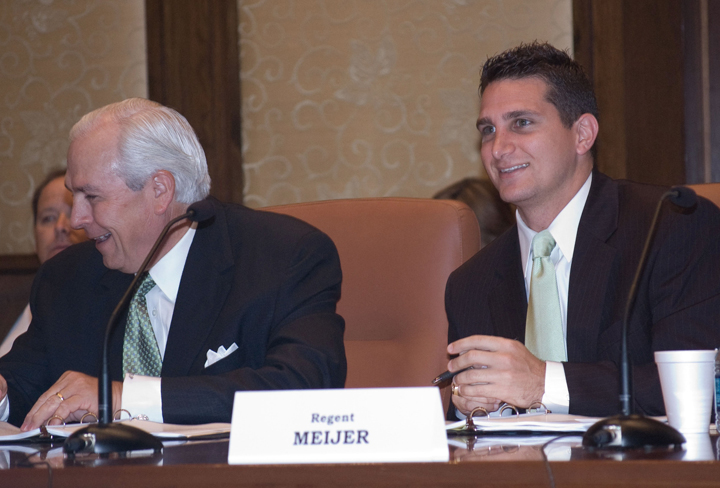 Like the other nine members of the UT System Board of Regents, Karim Meijer was appointed by Gov. Rick Perry. He participates in closed and open meetings to decide how funds for system institutions throughout the state will be spent.

He does not, however, get a vote.

The third student to hold the position in its short history, Meijer is responsible for representing 160,000 students who attend the 15 academic and health universities under the umbrella of the UT System. The 2005 law establishing a student regent does not give him the power to vote or count toward a quorum at meetings, but Meijer said he does not take his work any less seriously.

“I know for years, students really fought to have a representative on the Board of Regents,” Meijer said.

Legislation to create a student regent was being proposed as early as 1985, a battle that continued until the 2006 appointment of Brian Haley.

“By no means do I think we’re under-utilized by the board itself,” Meijer said, “They’ll ask for any input I have on various topics.”

Involvement in the monthly sessions requires going through reams of statistical information on everything from appointing faculty to financial plans proposed by the UT Investment Management Company.

“I’m still feeling my way around that,” he said.

Meijer is no stranger to juggling responsibilities, particularly political ones. Now in his fourth year at UT Southwestern Medical Center in Dallas, he played on the 2005 Longhorn football team while attending UT Austin as a business honors student.

“At the same time, the fourth year of med school, in a way, is kind of like your senior year at high school,” Meijer said, adding that he hoped the free time he had over other regents could be used to improve his performance in representing the student body.

“I’m a student regent for the entire UT System. I try to do what’s best for really all our students,” he said.

After having spoken to previous student regents, Meijer said he felt the need for more input from those he represents. “Maybe, in a sense, we’re under-utilized by the students,” he said.

In hopes of raising awareness of his role, Meijer plans to take the month of September to visit the system institutions throughout the state, a move similar to what the first student regent, Haley, did soon after being appointed.

“Go out there and meet the students that I represent and listen to them and take their feedback back to Austin,” he said. “I’m here for the students.”

Med student explains life on UT’s Board of Regents

Like any other fourth-year medical student, Karim Meijer grinds away for four weeks up to 12 hours a day in rotations ranging from internal medicine to surgery. In the fall, he enthusiastically watches his former Longhorn football team battle it out on the gridiron.

And in his free time, he visits 15 UT campuses, pitches ideas on where to dole out endowment funds and helps set the tuition that the more than 202,000 students in the UT System will have to pay.

Thus the life of the student regent on the Board of Regents.

“It just comes down to time management,” Meijer said. “You end up having to make some sacrifices.”

After decades of struggle by students across the state, the state legislature created the student Regent position in 2005. Like all the other Regents, the Student Regent is appointed by the governor, though he or she only serves for one year as opposed to the traditional six-year term.

The Student Regent is given all the access and privileges of the other Regents, except for the right to vote. Meijer said he feels the restriction does not hinder his ability to contribute as he still offers a perspective different than the other Regents.

“I’ve been [in school] much more recently than the rest of them,” Meijer said. “I’m more in touch with the atmosphere and I see things slightly differently.”

Meijer said his role on the board is the same as all the other Regents, which is to provide the best form of education to the students in the system. Meijer said because he is appointed by the governor as opposed to being elected by students, his role is not to be a student representative.

At a time of economic belt tightening and tuition increases at universities, many students and faculty have said they have felt a detachment from the budgetary decision that have been made. Meijer said he received no phone calls or e-mails from students that opposed the system-wide increases, which he said could be because he feels many students are not aware of the student regent position.

Meijer, currently a medical student at UT Southwestern, graduated from UT-Austin in 2006 with degrees in business honors and finance. He also started on special teams for the Longhorns’ 2005 national-champion football team.

Students interested in the student regent position must apply at the university level in the fall semester. Applications are gathered and filtered by the UT System, which then must send a minimum of two recommendations to the Governor’s office.

John Davis Rutkauskas, a business honors and finance sophomore, applied for the position earlier in the year. Rutkauskas, who serves on UT’s Presidents’ Student Advisory Council, said if he gets the appointment, he hopes to create incentives for college students to become K-12 teachers. Rutkauskas said he has spoken to Meijer a few times and has started familiarizing himself with the process.

“[Meijer said] the challenge is figuring out before you get into the process what the role of the student regent is,” Rutkauskas said. “That way, the transition process of changing the student regent every year [doesn’t create] a gap.”

The governor’s office has until June 1 to announce its appointment.