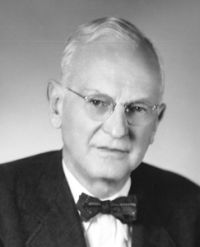 THORNTON HARDIE, El Paso, TX, was appointed to the Board of Regents of The University of Texas System in March 1957. Elected Board Chairman in March 1961, he served in that position until December 1962, and completed his six-year term in March 1963.

While a student at U. T. Austin, Mr. Hardie was President of the Sophomore Class and Sigma Alpha Epsilon fraternity. During law school, he was a member of Phi Delta Phi legal fraternity and Chancellors, the honorary legal society, and one of the organizers of the Texas Law Review.

An attorney in El Paso, Mr. Hardie was a member of the Texas and American Bar Associations and a former President of the El Paso Bar Association. He also served in various capacities on the boards of El Paso National Bank, Southern Union Gas Co., and Rio Grande, El Paso and Santa Fe Railway.

Submitted by the Family of Thornton Hardie, March 2018