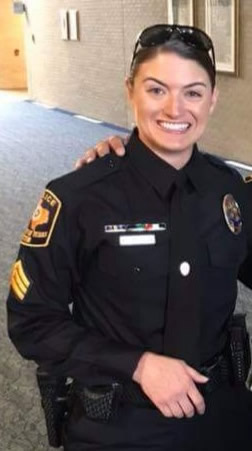 My journey into Law Enforcement was a journey for sure! I will break it down a bit for the reader.

My interest in civil service started at the very early age of 6, when I used to assist my father in making cookies for the prisoners he would preach to during his prison ministry visits to the Jester Units in Richmond, TX. I learned the value of empathy, volunteering, selflessness.

My grandfather was in the Army Air Corps during WWII, when he was discharged from the military he began to fly passenger Jets and Gliders. My father helped computer program the first space shuttle “The Enterprise” at NASA in 1969. I remember the stories and how inspiring both people where to me. This is where my love for aviation started, and when my interest in civil service grew more enticing.

When I was 11 I joined the Civil Air Patrol (an air force auxiliary) and continued on learning about aviation and began to inherit love for the Armed Forces. I continued into High School, and joined the Naval JROTC program, and eventually graduated as the first female Commanding Officer for the school, and the Battalion Commander for the State of Texas Naval ROTC.

I was on a roll, and I absolutely loved what I was doing and couldn’t wait for my dream of going through Officer Candidate School, obtaining my wings, and flying in the United States Navy to come true. This dream however, was never to be had though.

When I graduated High School, I was diagnosed with a benign brain tumor the size of a golf ball near my brain stem, and other benign tumors positioned around my brain. The prognosis did not look good for me, but when I woke up in ICU after brain surgery, and could cognitively decipher shapes and make full sentences in my head, I would have jumped for joy if I could have moved! I pushed hard for the next 2 years during recovery to regain my strength, mentally and physically, I was relentless in my pursuit, and I did regain my strength.

After a 5 year long battle with Naval Command, Congress, recruiters, etc. I realized, I was fighting a battle I could not win. Obviously the United States Military was not my calling in life. Instead of cowering away, I accepted the cards I had been dealt and I began to work hard on doing something within the similar field of civil service.

In 2013, I attended the Police Academy at Wharton County Junior College. After graduation, I began working as a Deputy for the Washington County Sheriff’s Office. I learned respect for my line of work, diligence, new knowledge, and patience.  Eventually I obtained a job with UTMB Police department. Hard work, vigilance, and humbleness paid off, and I acquired a patrol sergeant position, defensive tactics instructor, mental health officer, and have other certificates and licenses. I also teach at the Galveston Community College Police Academy, and head different volunteer/ charitable events at the UTMB Police Department.

I am living proof that you can never give up on your dreams. I am Living proof that you cannot give up on yourself. I empower others to do the same for themselves because I know for a fact, positivity, change, excellence is there for the taking, you just have to grasp it. I enjoy teaching and leading others to their potential. I believe in the goodness of man but also the need to protect the sheep from the wolves. Law Enforcement is a calling to me, and I am humbled to be acknowledged within this amazing department.